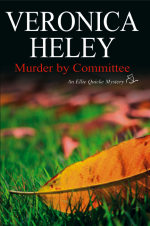 It seems an innocent request; would widowed Ellie Quicke visit a man whose dog died in an accident? The dog’s master – a powerful but unpleasant man – believes he was the intended target, and that an old enemy was responsible. Feuding financiers are bad news not only for the City where jobs are at stake, but also for Ellie, who can’t fill in a tax return without help.
The feisty widow already has more than enough to cope with; Aunt Drusilla’s health is failing, her bullying daughter Diana is in financial crisis and her architect cousin mixed up in one of the tycoon’s shadier deals – which happens to threaten the future of the parish.
Ellie discovers the tycoon has made more enemies than he can count, though not all of them are as helpless as they seem. Standing up for herself and other victims of the tycoon, Ellie waltzes straight into the firing line.
The sixth Ellie Quicke Mystery.
Hardback, Severn House 0-72786-282-0
Paperback, Severn House 0-72789-149-9
Large Print Hardback, Severn House, ISBN 978-0-72787-566-2
Electronic Book
Audiobook