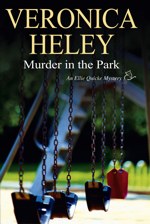 Murder In The Park – book 9

Ellie Quicke is a feisty widow, busy with family and church affairs until a pitbull savages a young mother to death in the nearby park. Witnessing the attack, Ellie’s friend Felicity goes into shock and calls on Ellie for help. Ellie’s enquiries indicate that the dog and his owner are strangers to the neighbourhood, but soon there is another attack…and after this one, too, the dog seems to vanish into thin air.
Meanwhile Ellie’s personal life is heading for meltdown as her difficult but endearing Aunt Drusilla is fading fast, her daughter Diana is taking ruthless steps to ensure she inherits the family wealth, and Thomas – upon whom Ellie has come to rely for companionship – decides to leave the parish. Driven to distraction, Ellie hardly has time to hunt down a killer dog, and has no idea that she is the next target – until the police question her for a crime she didn’t commit!
This killer is very close to home.
The ninth Ellie Quicke Mystery.
Hardback, Severn House ISBN 978-0727865786
Paperback, Severn House ISBN 978-1847510440
Review
PUBLICATION DATE: December 2007 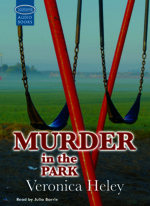 Ellie Quicke becomes involved in a hunt for answers when her cousin Roy’s wife witnesses a killing by a dog in a local park…even though Heley once more reveals the perpetrator early on, Ellie is such a complex and likable heroine that we follow her exploits with bated breath.