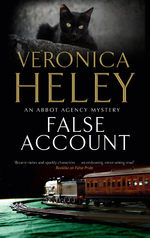 The mysterious deaths of two adored cats plunges Bea into the disturbing goings-on of the Tredgold family in the latest Abbot Agency mystery.

Wealthy Marcia Tredgold and her daughter, Charlotte, want Bea Abbot to find them replacements for staff who have left under a cloud. Bea discovers that all those dismissed were close to Marcia Tredgold, and senses that something is not right. Were they framed, and if so by whom – and why?

Even more curiously, when Marcia Tredgold gets Bea alone, she asks her to find out who killed her two cats. Bea resists becoming involved in the strange goings-on at the Tredgold mansion, until a shocking event leads her to worry about Marcia’s safety. Could the cats’ deaths be linked to other disturbing events? And whose account can be trusted in the web of secrets and lies which has been spun around the family? In her quest to uncover the truth, Bea’s own safety is put at risk.