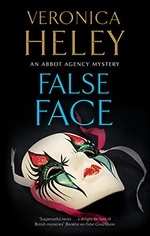 The 15th book in The Abbot Agency mystery series. Due for release on 30th Sepember 2021.

Bea Abbot’s newly married bliss is short-lived when she is dragged into a deadly game involving a famous actress, theft and murder.

Bea Abbot’s husband and talented artist, Piers, is in a state. His morning visit to actress and ‘national treasure’ Karina’s Belgravia home has ended in chaos. An antique necklace and diamond ring have been discovered missing, along with a memory stick storing Karina’s highly anticipated memoirs.

Karina’s housekeeper, Mrs Hennessey, her ghostwriter, Molly, and Piers himself are all accused of a conspiracy to rob the actress. When it transpires that the three were employed through the Abbot Agency, and some of the missing items are found in Piers’ pockets, Bea is dragged into the melee.

But as she investigates, events take a chilling turn . . . Can Bea get to the bottom of the sinister goings-on in time to save Piers’ reputation and to catch a killer?