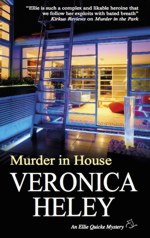 Ellie and her new husband are suffering from terrible colds when called to deal with Ursula, a student with a mind of her own, who has staged a sit-in at church and refuses to move. Ursula challenges Ellie to solve three mysteries; a broken engagement, her friend Mia’s disappearance and a murder. When Ellie agrees to return Ursula’s engagement ring to her fiancé, she begins to suspect that there is more to Mia’s disappearance and the ‘accidental’ death of another friend than their families and the police are willing to admit. As Ellie manages to solve one of the mysteries, she finds friends and family targeted as a powerful group hunt her down.
Meanwhile Ellie’s dreadful daughter Diana makes herself homeless and her architect cousin lands himself in yet another financial mess. Both become caught up in the race to ruin Ellie before she can produce the dreadful evidence of corruption and abuse that is haunting the council chambers.
Every lead returns to Ursula, who has not been entirely open with the truth. But what can one young girl do, against such a powerful family?
The tenth Ellie Quicke Mystery.