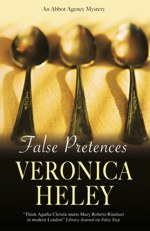 Bea Abbot and her two young assistants run a domestic agency which doesn’t ‘do’ murder. There was nothing sinister about Zander’s request for Bea to accompany him on an errand to a grieving widow, but it was awkward because it was Zander who had exposed the scam which his boss Denzil had been running on the Tudor Housing Trust… after which Denzil had, unexpectedly, died. His widow, ‘Lady’ Honoria, turns out to be a bullying racist who wants to sue the Trust for defamation of character, while the paperwork that could have proved her husband’s guilt has gone missing.
Oliver, Bea’s computer geek of an assistant, is delighted to delve into the mysteries left on Denzil’s computer, while Bea is cajoled into silence by the ninety year old Lord Murchison whose family and friends have run the charity for ever… and who face ruin if the truth comes out.
Zander and Oliver find themselves suspected of murder, while Bea thinks up a novel way to rescue her son’s failing marriage. There is information hidden behind pictures of pretty girls on a computer, and telephone calls which lure victims to their death. The first murder may have appeared natural, but those which followed did not.
The fourth Abbot Agency Mystery.