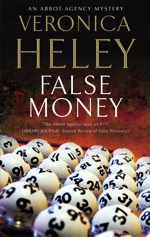 Bea Abbot runs a domestic agency that does not ‘do’ murder. But the disappearance of Tomi, the star of an award-winning short film, is a different matter, especially when charming but feckless Chris bribes Bea to investigate with a bouquet of flowers. When Bea – working through personal problems – discovers that Tomi is not the only one amongst his friends to vanish, however, she wonders if her own life might be in danger too…
The fifth Abbott Agency Mystery.

“Verdict: As in this title’s predecessors, Bea reveals her personal strength as she nourishes the friends she has reluctantly adopted as her own surrogate family and cleverly unwraps the motives behind several deaths. For fans of sophisticated contemporary cozies.” Library Journal