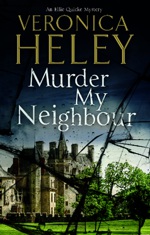 Troubles never come singly. Ellie’s old friend and housekeeper falls off a ladder and hurts herself after seeing a ‘ghost’ in a neighbour’s house . . . while Ellie is trying to get rid of a desperate young man, who says he’s looking for his great aunt . . . who happens to own the house in question. Mrs Pryce had told everyone she was moving to a retirement home, but never arrived there.
A walk round the block reveals someone is still tending the vegetables in Mrs Pryce’s garden. Perhaps the house is not as deserted as it looks?
So where is Mrs Pryce, and who knows more about her departure than they are prepared to tell? And how can Ellie deal with her difficult daughter’s latest financial disaster?
The twelfth Ellie Quicke Mystery