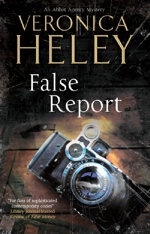 While Bea Abbot worries that she’s lost control of her domestic agency, she’s asked to find some domestic help for an eccentric little musician falsely accused of murder. She doesn’t realise how dangerous this might be until Evan – fleeing from attempts on his life – lands up on her doorstep.
Researching the gang who’d used an attractive girl to entrap Evan, Bea finds traces of them throughout high society and realises that some victims of the Badger Game may be uncomfortably close to home.
Can Bea sort out the problems at the agency and mend the broken relationships with her extended family before she is driven to sell up and retire? Worse, can Bea keep Evan alive while all he thinks about is composing a song for pretty, dead Josie?
Book 6 in the Abbot Agency series.
Hard cover, Severn House ISBN 978-0-7278-8117-5
E-book, ISBN 978 1 78010 201 6
Electronic Book, Kindle, Joffe Books, ISBN: 978-1-80405-613-4
Audiobook, Isis
Audio Download, Audible.com
Release date: November 2011

When Jeremy shows up at Bea’s door, fleeing an attempt on his life, [Bea] agrees to help him, if only to put the mess behind her. The trail leads to a gang of high-society folks… A nice mix of suspense and cozy ambience.

An old friend talks Bea Abbot into helping a musician caught in a honey trap.
Kind-hearted Bea lets Jeremy stay with her.
Heley’s [False Report] may be her most delicate and best balanced yet.