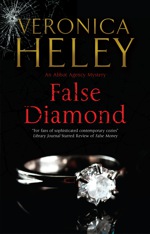 Bea is drawn back into the questionable doings of the members of the multi-billionaire Holland family, including an engagement with a fake diamond ring, an alleged suicide attempt, an abusive man who tries to put the frighteners on Bea, and the ambiguous behaviour of the black sheep of the family, who turns out to be the joker in the pack.
Book 8 in the Abbot Agency series.
Available from 28th November 2013.
Hard cover, Severn House ISBN 978 0 7278 8298 1
Paperback available from November 2017
Electronic Book
Also available as an audiobook from Isis – ISBN 978 1407 947 792
Audio Book from audible.com

First Page of the book

Bea Abbot ran a domestic agency whose watchword was discretion and whose clients did not wear fake diamonds . . . until, that is, the Holland family crashed into her busy day.
Wednesday afternoon
It took a lot to rile Bea Abbot.
The woman in the mink coat succeeded. She burst into Bea’s office, pushing someone before her. ‘Mrs Abbot? Right! We need your help!’
Bea said, ‘I’m afraid I don’t—’
The mink coat swung a young woman into a chair and stood over her. ‘Mrs Abbot will set you right!’
‘Who .. . .?’ said Bea. Out of the corner of her eye she was aware of a third person hovering in the doorway . . . until he was pushed aside by Carrie, her office manageress.
Carrie, arms akimbo, was not amused at the intrusion. ‘I’m sorry, Mrs Abbot. They asked if you were in and swept right past me. Shall I . . ..?’
Bea had belatedly recognised the young woman in the chair. ‘No, Carrie. It’s all right.’
Carrie hesitated. She was no fool and could sense trouble.
Bea was firm. ‘I’ll deal with it.’ She waited till the door had closed behind her office manageress to say, ‘Dilys? Are you all right?’
Obviously, the girl was very far from all right. Her hair was all over the place, her lipstick was smeared, the handbag over her arm was open and her coat was awry. ‘It’s not true! He loves me!’
‘Humph!’ said the mink coat, seating herself, unasked. ‘Let me introduce myself. I am Dilys’s aunt, Sybil Holland. I do not visit London often, and I do not normally concern myself with what the family gets up to. The dividends I receive from Holland and Butcher are not my only source of income, and I have never questioned my brother’s ability to run his companies until now. It is true that I expressed some concern when I heard that his only daughter was marrying a salesman with a dubious background but he would not be warned, not he! Little pig-head, we used to call him when we were young, and the years have done nothing to compensate for his lack of common sense. So what do I find when I return to this distressingly run-down country where bad manners seem to be the norm? My niece has allied herself to a charlatan who gave her a piece of glass for an engagement ring! Typical!’
Bea looked at the mink coat, recognising intelligence and the easy assumption of command possessed by those accustomed to wealth. Yes, the woman must be seventy if she was a day, but her mink coat – it showed a disregard for popular opinion that she should wear one – was superb, and she was wearing the biggest, most sparkly diamond rings Bea had seen in a long while. Her hair was a doubtful red, her eyes were outlined in black and she wore a bright blue eyeshadow, the sort which had been popular in the sixties. Was she out of date? Yes. But those same eyes glittered as brightly as her diamonds.
‘It’s not true!’ screamed Dilys, throwing her legs about. ‘It’s not! He loves me!’
Sybil Holland sniffed. ‘Chucking your toys out of the pram will get you nowhere.’