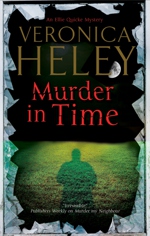 Ellie opens the door to a man who is a stranger but instantly recognisable as the father of her housekeeper’s brilliant but difficult young son. Mikey had been conceived at a party at which his mother Vera, a schoolgirl, had been drugged, raped and subsequently lost her chance of higher education. Abdi hadn’t wanted anything to do with her – then. Twelve years later he is a wealthy man whose wife cannot have children, and he aims to pay off Vera and adopt Mikey. Vera and Mikey react badly. For the first time Vera manages to tell Ellie something of the tangled relationships which had resulted in her pregnancy. She had been aiming for the stars, but ended up as a cleaner … until Ellie took an interest in her.
Ellie discovers that Vera still thinks fondly of her then boyfriend, even though he had also rejected her after that fatal night. But was that because he had fallen out of love with her, or because his father had been murdered that same weekend? Could the two events have been connected? And what part had Vera’s closest friends and her family played in the tragedy?
Uncovering betrayals between friends, and discovering the greed and jealousies behind past events only makes it more difficult for Vera and Mikey to decide on their future.
The fifteenth Ellie Quicke mystery.
Hardback, Severn House. ISBN: 97807278 83988
publication date: 29th May 2014

The indomitable amateur sleuth Ellie Quicke is back doing what she does to perfection. Vera, the young woman who lives with Ellie and her husband, has always refused to name the father of her son, Mikey. But she’s brought the boy up lovingly, while eventually saving enough money to put herself through college.
So it’s a shock to everyone when an aristocratic Somalian named Abdi appears on Ellie’s doorstep, announcing that he’s Mikey’s father and has come to take the boy to Somalia. Neither Vera nor Mikey are impressed, but Abdi is insistent and even threatening. Eventually, Vera reveals that, years earlier, she was at a party at the home of her then-boyfriend Dan, when a gang crashed the party. But worse, Vera was gang-raped, and Dan’s father was murdered. Neither the rapists nor the killer were ever found, but Ellie knows it’s up to her to solve the twin mysteries and keep the repercussions of that dreadful night from hurting Mikey, Vera, and Dan all over again. An absorbing plot starring the always-charming Ellie, and a slam-bang ending, makes this one a pleasure to read.
by Booklist,
1st August 2014
In Heley’s 15th outing for Ellie Quicke (after 2013’s Murder With Mercy), the harried grandmother finds herself spread thin while caring for her cranky infant grandson, Evan, and helping her live-in housekeeper, Vera, through a crisis. Both women are shocked when Abdi, the man who raped Vera when they were both teenagers, turns up seeking custody of their son, Mikey, now nearly a teenager himself. Ellie decides to intervene after Abdi claims to have evidence Vera murdered one Dr. McKenzie, owner of the house where the rape occurred. Though Ellie has faith in Vera’s innocence, she also knows the wealthy Abdi will use whatever means to get what he wants. Between defending Vera and discovering the true killer, Ellie is once again immersed in a web of deceit, debauchery, and death. Heley’s prose is sure, her characters well-drawn, and though her tone is light, the plot is satisfyingly dark and sinister.
by Publisher’s Weekly, 21st July 2014

Tuesday, early evening
Ellie opened the front door with her grandson in her arms . . . and recoiled.
She’d never laid eyes on the man before but she knew who he was. Or rather, who he must be.
Tall and slender, dark-skinned and handsome with fine features. A high forehead. Wealthy. British Somalian?
He was expensively dressed in a brown cashmere jacket over a white polo-necked jumper which was either silk or silk mixture. Well-cut dark grey jeans, NOT off the peg. Boots, shiny.
Hard, black eyes. An air of command.
He was the very image of . . . no! No! NO!
He couldn’t be. She was seeing things. She blinked. He was still there. The baby in her arms twisted around to inspect the newcomer and said ‘Gawk!’ around the spoon he was thrusting in and out of his mouth.
‘I’m looking for Vera. Are you her mother?’ A well-educated voice. English might not have been his first language, but he’d been to good schools here. He twitched a smile. He wasn’t accustomed to being kept waiting but was holding impatience in check.
She made no move to let him in. ‘Vera . . .? Well, yes; she does live here, but . . . I’m Mrs Quicke, Mrs Ellie Quicke. Not her mother. And you are . . .?’
‘You’re the housekeeper, I presume?’
Ellie reddened. She’d worn her oldest clothes to look after baby Evan that day, and yes, her short, silvery hair was probably all over the place and she knew there was a patch of baby sick on one shoulder. ‘No, but this is my house. At least: my husband and I live here with our housekeeper, Rose.’
Also with single-parent Vera and her son. Perhaps it would be best not to mention them till she’d found out what the visitor wanted.
‘Rose? Ah, she’s Vera’s mother?’
‘No, Rose is an old family friend, and our housekeeper.’
Ellie was angry with herself. She was handling this badly. If this man was who she thought she was, then what ought she to say about Vera? Should she admit that the girl lived there, studying for a business degree while paying for her board by helping Rose to look after the house? Or, should she deny that she even knew Vera? Yes, that might be best. Except that, oh dear, she’d already admitted that Vera lived there.
The stranger ducked his head, not smiling, and moved forward until she gave way, letting him into the hall. ‘I’ve come to the right place, then. I’ll wait for her, shall I?’ It wasn’t a question.
He looked about him, assessing the evidence of inherited wealth; the panelling and the tiled floor; the door propped open to give access to the kitchen quarters, other doors leading to the dining and sitting rooms, the fine old staircase, and the view through to the conservatory at the back of the house.
‘Pleasant,’ he said. Patronising. Raising his eyebrows. ‘Is the baby another of Vera’s little mistakes?’
Ellie flushed. ‘No, of course not. He’s my grandson. I look after him one day a week when his nanny has her day off.’
Ellie wanted to scream at the man to leave, get out, not to upset their quiet lives. And didn’t, because . . . well, it wasn’t her business to intervene between husband and wife, was it? Well, not husband and wife exactly.
What had Vera told her son about the man who had fathered him? Perhaps the truth was too harsh for a small boy to hear and, as far as Ellie knew, young Mikey had never raised the subject.
Little Evan struggled in Ellie’s arms, dropping the spoon he’d been playing with. He was a strong lad for his age, and she was not as young as she had been. She tried to put him into his buggy. He resisted. She could never get him into or out of it without a wrestling match.
She sought for something to say. ‘Does Vera know you’re coming?’
The man shook his head. ‘A pleasant surprise.’
Ellie didn’t think it was going to be a pleasant surprise. She didn’t dare think what Vera was going to say when she saw the man who’d raped her when she’d had too much to drink at an end of school year party.