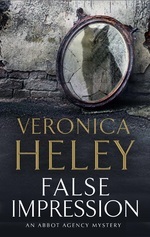 Bea Abbot wishes she’d never got mixed up in the affairs of the Holland family, when she finds her house and agency under siege. Bea Abbot’s friend Leon Holland has asked for her help in establishing an alibi. But why would he need one? First, he tells her, he had a narrow escape from being run down in the road, and then he was lured with a mysterious message to a car park to meet someone who didn’t turn up. Matters escalate when two bodies are found in the car park, slumped over their steering wheels, stabbed to death. Then everything is thrown into chaos as a devastating virus infects the agency’s systems. A hidden camera. Hate mail. A nasty practical joke. It’s clear that the Abbott Agency has been targeted. But why? And where is it leading? Bea is about to find herself drawn into a vicious power struggle involving greed, envy, ambition and tangled family relationships.
Book 9 in the Abbot Agency series.
Available from 28th November 2014.
Hard cover, Severn House ISBN 978-0727884459
Large Print: ISBN 978-0727872647
Electronic Book