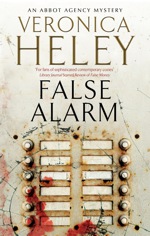 Bea Abbot is drawn into the hunt for the man or woman who laid a booby trap in the flats owned by the powerful head of an international company. Sir Lucas accuses his wife of the attempt on his life, so Lady Ossett demands that her daughter Maggie – who has made her home with Bea – should abandon everything to look after her mother.
Bea finds Lady Ossett in a state of fear, while gossiping elderly ladies cast doubt on the probity of their neighbours, who include a ‘therapist’, an ex-employee of Sir Lucas’s, and a cross-section of yuppies and oddballs with problems. Call-girl cards have been left in tenants’ letterboxes, a cat has met an untimely end, and snow is forecast.
Trivial incidents escalate into violence and death. Bea ruins two beautiful pairs of high-heeled boots before she can separate the foolish from the murderous and reveal who dunnit.
Book 7 in the Abbot Agency series.
Release date: November 2012
Hard cover, Severn House ISBN 978-0727882370
Electronic Book, Kindle, Joffe Books.
E-book, March 2013, ISBN 978-1780103655
Large Print: tba
Electronic Book
Audio Download, Audible.com

‘Think of the series’ seventh outing as a big old-fashioned country-house case, Agatha Christie-like, but dressed-up smart and chic for today.’

‘The Abbot Agency’s seventh outing will be just the thing for readers who like their cozies with a bit of bite.’